A Paralympian swims home in search of gold

Growing up in Camanducaia – MG, Dias took up swimming relatively late for a professional athlete—age 16. Hisinspiration? Watching one of his fellow countrymen swim at the Athens 2004 Paralympic Games and win seven medals. “I didn’t know about adaptive sports until I saw swimming at the Paralympic Games,” Dias said. He had tried both soccer (“we’re Brazilian, and this is the land of it”) and basketball as a kid, but neither sport stuck. Equipment was a problem and his family had to travel 150km every time he broke a prosthetic. But after just eight lessons, Dias was comfortable swimming in a pool. “People say I started swimming late,” Dias wrote in a post on LinkedIn. “To me, late would be never. I have always done things at my own pace.”

And what a powerful pace it has been. Just two years later, Dias was competing on the world stage at the 2006 IPC Swimming World Championships in Durban, South Africa, even swimming in a 4 x 50m relay with one of his heroes (they won gold). At the same event, Dias also won a gold medal in the 100m freestyle and the 200m individual medley. In the Beijing 2008 Paralympic Games, his first Paralympic Games, he won nine medals (four gold, four silver and one bronze), more than any other Paralympian. 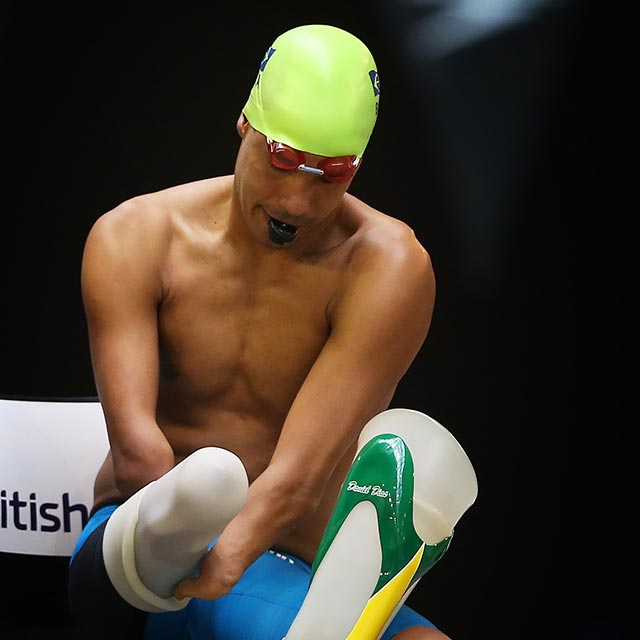 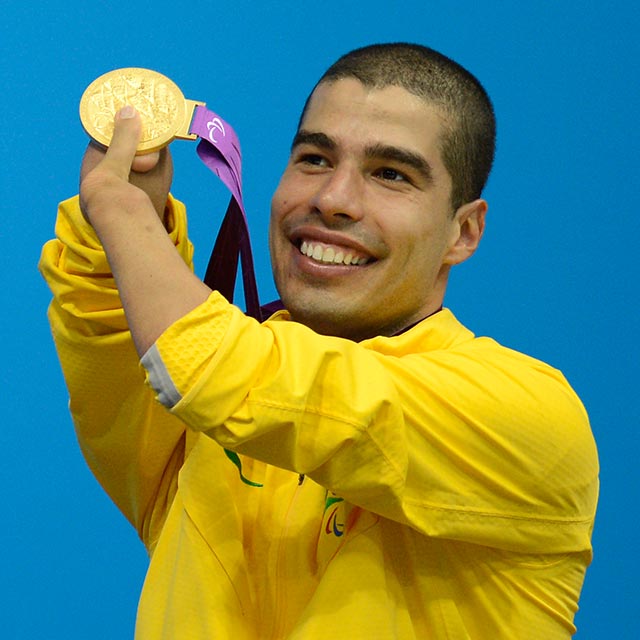 At the London 2012 Paralympic Games, his wins came across the board, with gold medals in the freestyle (50m, 100m, and 200m); the butterfly (50m); the breaststroke (100m) and the backstroke (50m). Most swimmers specialize in perfecting one or two strokes; to be a master of so many events is unusual. “I believe that the medals are the result of all that I do when I train. I fight each day to be able to do a good job representing Brazil and come out of it with some big wins.” His exercise regimen includes Pilates as well as intensive swim training.

Dias carried his country’s flag at the Opening Ceremony of the London 2012 Paralympic Games and has become somewhat of an ambassador for Brazilian sports, specifically Paralympic sports, having served as a supporter of the country’s bid for the Olympic and Paralympic Games in 2016. He spoke about Rio’s plans for the Paralympic Games during an official visit with the International Olympic Committee in April 2009. “The first time that Paralympic sport had the same status as Olympic sport was at the 2007 Pan American Games in Rio. And our plans for Rio 2016 will have the same spirit. Hosting the most important sporting event on the planet will promote the benefits of inclusion in Rio de Janeiro and throughout Brazil,” he said.

As a member of Team Visa, through which Visa provides financial and marketing support to athletic hopefuls in the run-up to and during the Olympic and Paralympic games, Dias embodies Visa’s values of acceptance, partnership and innovation. “I’m really happy to be part of a great team, and to be reminded by Visa of a huge moment that we’re going to experience, the Paralympic Games on my home ground, in my backyard. I can hardly believe it!” Dias said, noting that it is “a great honor to be able to swim with my family by my side, and the home crowd.”

The Rio 2016 Paralympic Games will start on September 7th: Brazilian Independence Day and the eighth anniversary of Dias winning his first gold medal at the Beijing 2008 Paralympic Games—the first gold medal won by Brazil at that event. “I could hear the Brazilian national anthem on the other side of the world,” he told Visa. “It’s very emotional looking at the scoreboard and I seeing my name and suddenly I break a world record and win a gold medal for my country.“

Alison Rogers is a New York-based writer.  She lives with her husband and toddler, who functions as her personal trainer.